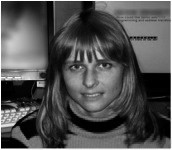 Elena Novaretti - is a completely self-taught interdisciplinary artist and researcher. Reluctant by nature to learn the concepts in the way they are usually proposed - or even worse, imposed - leaves school early without finishing high school

"I thought that scientific subjects were learned there, but it seemed the exact opposite ..."

She has always been fascinated by the numerous branches of science and by the various whys, but she is substantially endowed with an intuitive-creative nature. At 11 she discovers her musical talent, progressively revealing herself capable of playing "by ear", composing and even arranging: even in this case she will prefer an "autonomous" approach, attending piano studies for only two years and then abandoning them rather disappointed "It wasn't what I was looking for, I already knew harmony, and I was never interested in being a good performer, I'm a composer!" A gift is the music that unfortunately will only partially cultivate, not being able to manage all his talents with the same consistency.

At 14 she learns to program the computer, at first motivated by the simple passion for video games, but who will forever become her irreplaceable workmate, devoting herself mainly to graphics, digital photography and image and sound processing algorithms.

At the end of the 90s he discovers the elegance of fractals and the theory of Chaos, conducting a long and in-depth study of the subject and always in complete autonomy but with strong passion. In 2002 he created his own software for the exploration of "fractal universes", developing special algorithms, perhaps the first at the time capable of generating images of 24-bit chaotic systems with continuous gradients "The fascination for what we improperly define chaos was initially motivated in me by the aesthetic factor alone - I am an artist - but in reality my mind was already enriching, starting to unconsciously elaborate the fundamental rules that are the basis of nature, but of which we do not yet know the ABC “He also has a solid theoretical and practical basis in mechanics, electronics and in particular electrotechnics; he writes songs and short stories (unpublished for now) and numerous articles. In the first decade of the new millennium he devoted himself to the study of the problem of auto-stereoscopic visualization "a dream of mine always, to be able to see perfect 3D images without glasses"; then to digital printing technologies, and even throws a look, rediscovering the passion for Pure Mathematics, to the "fourth order operators" (tetractions, super-roots and super-logarithms) looking for the possibility of an analytical continuation in the domain of numbers Real. He currently believes that he has achieved the mental development and the capacity for logical abstraction necessary to face the most difficult challenge, the "final" one: the systematic study of Physics, to try to understand once and for all the logic and the rules that underlie of the universe in which we live "My only and great love is not my ideas, but the Truth: I'm sure that at least this will not prove yet another disappointment" 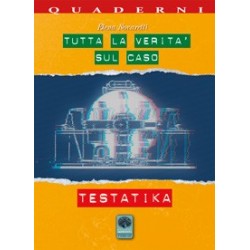