Carlo Splendore (Velletri, 1922 - Rome, 28 October 2008) Mechanical industrial engineer, he served as a researcher at the National School of State for Agricultural Mechanics in Rome and subsequently, as holder of the chair of Mechanics, Fluid Machines and Laboratory at the 'State Technical Industrial Institute “G. Marconi ”in Rome. For years he has dedicated himself to teaching and experimental research, applied in particular to the field of compression ignition engines. In the last years of his life he became interested in the study and research of the phenomena of "frontier science" and in particular of vital energy. In the latter area, it has created and developed an instrumentation suitable for detecting and measuring the orgone energy discovered by Wilhelm Reich. He has lectured, participated in numerous conferences and collaborated with specialized periodicals on these issues. He is the author of: "The Engineer Mechanic Student" - Edagricole, Bologna, 5th ed. 1985; "The Wave of Life in the Harmony of the Cosmos" - Technipress, Rome 1988; "As below so above" - ​​Atanor, Rome, 1994. 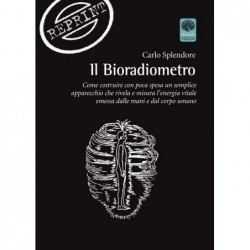